One of the 'New7Wonders’ of the World, the city of Petra, Jordan offers the perfect cruise excursion for ancient history lovers and hikers alike. Spanning a fantastic 264-square kilometres, Petra’s multiple UNESCO World Heritage Sites are full of stunning ancient structures built into the mountainside that are just waiting to be discovered by eager explorers.

With so much to see, which sites and structures will you uncover first? Read on to find out all you need to know about visiting Petra’s archaeological playground.

The history of Petra

Located in southern Jordan, the rose-red city of Petra, can be found on the slope of Jebel al-Madhbah in the mountainous valley nestled between the Dead Sea and the Gulf of Aqaba. The city is thought to originate as far back as 9,000 BC, however, it is believed that it was officially established in 400 BC as the capital city of the Nabataean Kingdom, where it was a wealthy trading hub.

The Nabataean Kingdom lost its independence in 106 AD when it was taken over by the Romans. Petra continued to trade but when sea trade routes began emerging and over 350 earthquakes destroyed many of its grand structures, the city began declining in wealth and importance. By the early Islamic era, what was once a thriving trade city had become a lost land, only to be rediscovered again in 1812 by Swiss explorer John Lewis Burckhardt.

Today, Petra remains a stunning display of ancient architecture. UNESCO describes the city as “one of the most precious cultural properties of man’s cultural heritage”, with the site welcoming hundreds of thousands of visitors from all over the globe every year to marvel at its rose-coloured, mountain-cut structures in all their glory.

With over 250-square kilometres just waiting to be explored, take a look at the above map to plan which of these amazing sites you’ll want to visit along the main tourist path of Petra.

Top sites to visit in Petra

“Last year I spent a week in Jordan. I was visiting the country for a wedding but managed to squeeze in a few days of sightseeing too. There was one place on my dream list… Petra. It’s one of those incredible places I’d seen in films and photos and couldn’t believe the ancient city’s beauty and history. I just HAD to visit.

“When I think back to my time at Petra, the most memorable moment was walking down The Siq – a narrow gorge over 1km in length. With 80m high cliffs on each side, it’s amazing how small it made me feel. Then I emerged at the stunning rose rock façade of The Treasury.”

“Petra has fascinated me since I was a teenager and was #1 on my bucket list for almost 20 years, so I was completely stoked to visit this mythical-looking ancient civilization.

“While the entire day was unbelievable, one of my favourite parts was actually wandering through the wavy striped stone walls of the Siq - the canyon you walk through to reach the first buildings of Petra. It just feels very mysterious and ancient, and you expect to see a caravan of camels around the corner at any moment.”

Albert & Carrie, Backpacking with the Bonds

“We are lucky to have lived in Jordan for several years (once near Petra) so we’ve had several opportunities to visit the world-renowned site of Petra. Petra is an absolute must for any first-time visitor to Jordan. Our two favourite things about Petra are the first glimpse you get of the Treasury (the iconic image of Petra) after winding your way through the Siq.

“The best time to get photos of the Treasury is early in the morning or just before closing when the light is good and the crowds are sparse.

“Our advice to anyone visiting for the first time would be to also check out Petra at night. You think the Treasury looks incredible during the day, well wait until you see it at dark!”

“I also loved getting the famous Treasury to myself at the end of the day - the crowds had left, and I could get photos to my heart’s content!

“One major tip for first-time visitors is that if you’re visiting Petra on a tour at night (which you totally should!), you can actually stay inside Petra while they set up all the lanterns and you can be the first to get gorgeous night time photos without anyone there. I wish I’d known that when I visited, as it would have made the experience even more cool.”

“Petra had been on my bucket list for a long time (I love learning about history and culture when I travel) and during a trip through East Africa, I eventually got to Egypt and found myself looking across at Jordan. I knew then that the time was right to dive into travelling the Middle East to learn more about the amazing wealth of cultures that have existed here and, of course, Petra stands out as a mesmerising and slightly mysterious centrepiece in this world.”

“Like most people, I imagine, the highlight of my time in Petra was hiking to the Monastery early in the morning - not only to avoid the crowds but also to relish the dawn colours flooding over Petra.

“The first time you get to the Monastery and stare at it up close, it really is hard to take it all in. That's why you shouldn't stop, but instead, harness that little bit of extra effort and climb up to the lookout point that faces the Monastery. Here you'll get the most sensational views over this ancient place of worship, as well as the surrounding desert-scape, which never failed to amaze me during my time in this part of Jordan.”

“The highlight of Petra for me was when I hiked up to the Ad Deir. Reaching the beautiful Monastery, there was only me and a couple of other people there. I sat in front of it for quite a while just taking in the immense beauty of the ancient building. I had a lot of these moments where I just sat and appreciated the site. I really took the time to relax during my visit there which I’m very grateful for doing.” 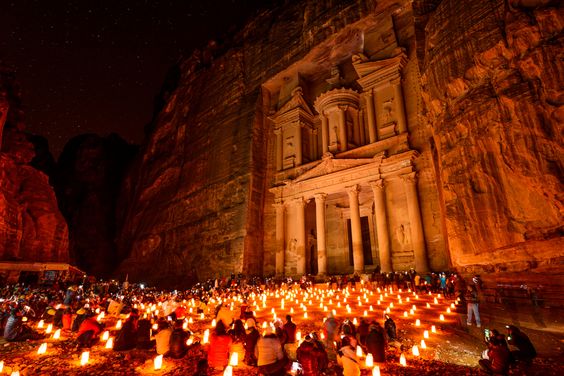 As well as marvelling at the rose-coloured structures, bloggers Eric and Amber from Food And Drink Destinations recommend spending some time looking at the animals that roam the ancient city.

“In addition to snapping the requisite selfie in front of the Treasury, and wandering through the desert-like caverns, we loved watching all of the cats. That might seem a little silly, but we have hundreds of cat photos from our travels and can sit and watch them forever. It helped to be able to do so with a unique backdrop like Petra.”

Although an ancient city, Eric and Amber would recommend Petra to nature lovers and anyone who enjoys hiking long and often challenging terrain. “I don’t think we realised how large Petra is. I didn’t realise it is more like a nature park and is the perfect destination for hikers and nature lovers.”

As there is a lot of walking involved, Eric and Amber stress that it is important to do your research and plan accordingly to make the most of your trip. Make sure you are wearing comfortable clothes including closed-toe shoes and a scarf to cover your face as the area can sometimes be dusty. With hot temperatures and minimal shade, make sure you have sunglasses, a hat, sun cream and bottled water with you to keep you cool.

Eric and Amber also recommend meeting other travellers and locals on your trip, as well as trying some of the local cuisine if you have the opportunity to.

“As a couple who travels for food, we generally don’t plan itineraries or destinations based on historic sites like Petra, but this was one exception to our rule. That said, the food in Jordan, and the people that we met there, really made our trip to Jordan worthwhile.”

There a range of cafes and food shops (and toilets!) along the route, but it may be worth carrying a few snacks with you just in case. 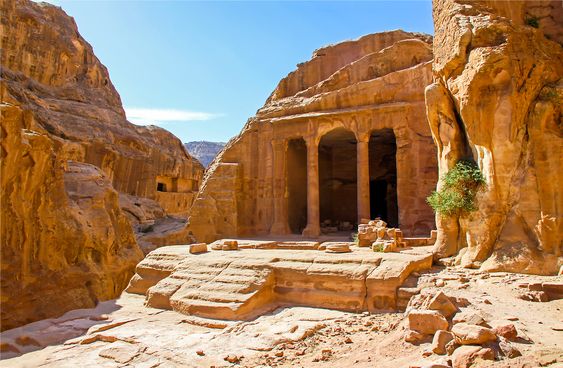 Here at Azamara Club Cruises, we offer a great 10-hour Petra shore excursion, Petra, the Rose Red Desert City, that is sure to fascinate and feed your imagination.

Your adventure starts by hiking through the Siq, admiring the water channels, carvings and representations of Nabataean gods. Once through to the other side, you’ll be presented with the awe-inspiring sight of the Treasury.

After a few photos and marvelling at this spellbinding structure, you’ll be shown the Greek Theatre, Royal Tombs and the Colonnaded Street, as well as given the chance to view the Temple of Qasr Al-Bint, the city’s only free-standing structure and the main place of worship of the surrounding Bedouin families that still inhabit the land to this day.

It's worth mentioning that there are carriages and horse rides available, however, it is strongly recommended not to use these forms of transport due to poor treatment of the animals.

Split over two days, the all-encompassing Aqaba Overland shore excursion offers a guided tour of Petra’s main sites complete with a stay at the acclaimed Moevenpick Hotel. On day one, you’ll be whisked off to the hotel where you can either explore the locality, or if you prefer, you can sit back and relax with a sumptuous buffet meal and cocktail with your fellow tour group.

On day two, wake up ready for a full day’s exploring and head to “Little Petra”, an old suburb of the ancient city. Learn about the agricultural history of this small site and how it provided essential water for the crops that once grew here.

After that, you’ll be off to Petra, the Red Rose City, where you can marvel at the Treasury, the Roman Theatre, Royal Tombs and more with your own eyes. After the tour, you’ll be taken back to the hotel where you can relax and enjoy a sumptuous lunch.

Want to explore all of our Petra shore excursions? Browse them here.

For wine lovers, one of the great joys of cruising is getting to visit vineyards and wineries from every corner of the globe. It’s about more than just...

Seven Things to do in Japan

In 2019, we’re cruising to Japan on an immersive country-intensive voyage. These unique itineraries allow travelers the opportunity for in-depth...

From Buckingham to Bangkok, the world is scattered with palaces that will take your breath away. Some are still official royal residences, while others...